skip to main | skip to sidebar

A midsummer's update on Johnny's trip back to Ypsilanti

I woke up at 7:30 am Sunday for the drive back to Jersey City sad that my first vacation in a while was over but I also know I did everything I could to see everyone I could. I went all over and had a blast. It really was like I picked a good spot in MICHIGAN to vacation and spend money. Michigan is still a great place to go and see people, and do things like hang on a lake or drive real fricking fast down I-696 from I-75 to I-275 at 80-85 just to DO IT as I don't GET to do that kind of thing here. Running with the bulls if you will but only for highly skilled drivers who know what the look in the other drivers eyes mean. Until you live in a big city you have no idea how cathartic some fast driving is after you done growed up in SE Michigan. As you all know but they sometimes miss here, it's in our blood.

So I leave through Ypsilanti which logic says is wrong because from where my best friend and "host family" lives in Canton I'd go quickly around the block to I-275 to I-75 into the Ohio turnpike, I-80 eastbound and down. I wanted to drive the old way (Michigan Ave. out to 23 south to the I-80 in Maumee) and take another look at the majestic form that is Ypsilanti and unknown to me (until the night before) the brand new Mongoloid Barbecue right downtown on Michigan Ave. Ha Ha Ann Arbor, now we have one more thing in common with you, a Mongolian Barbecue and an atrocious 3-9 football team. As for the football, haha, the jokes on you, we wear 3-9 seasons like comfy sweatshirts and ballcaps on a fall football Saturday with a small bottle of liquor in our back pockets....going to watch Michigan lose to Toledo. Sheeeeeeeit, been there done that before our Brothers in Blue. Yes, that Rocket mascot does look like a penis. Losing to Toledo ain't no nuthin'.

Ypsi, you still looked good, great in fact. Even the construction on Washtenaw Ave wasn't all THAT bad. The burger with goat cheese on it at Sidetrack is still the best burger I've ever had. Johnny's old neighborhood on N. Adams between Forest and Cross still looked the same but what can ya change in 7 months really? Sure gonna miss that midwest college football mindset to be certain. Heading down to a Rutgers game? It could happen but let's face facts, the Big East isn't the Big Ten and the Ivy League/Patriot League isn't the MAC. Well a Lehigh game might well be aces and I'll let you know on that one.

Driving by Fuller fields in Ann Arbor last Tuesday while they were cutting the grass was another thing greatly missed. Not a lot of fresh cut grass smell around these parts. The biggest visual difference about town was the castle of a building rising at Huron and State St. in Ann Arbor. They were just welding the third and fourth floors when I left and to come back and see it all fleshed out and as giant as it is now was a jaw dropper.

Nothing was more of a jaw dropper by the way than the fact Ypsilanti is THE new filmmaking capital of the world. Robert DeNiro? Jimmy Fallon? I remember Drew Barrymore's flick shot there but DeNiro? Go Ypsi go!

Jersey City is treating me well and New York City is an awesome playground but don't ever sell yourself short Ypsi/Arbor, you have a whole lot to see and do and an educated interesting populace with which to it with.

I'll try to do a better job checking in from time to time but you always know where to find me...
Posted by Johnny Action Space Punk at 12:28 AM 8 comments:

From wet and rainy Jersey City, Johnny wanted to take the time to wish all his pals in Ypsilanti and Ann Arbor a wonderful Christmas and great New Year!
Posted by Johnny Action Space Punk at 7:35 PM 6 comments:

Many of you probably already know that Neil Young spend a decent amount of time in Ann Arbor back in the hippie days. One imagines him toking it up and hanging around the Diag strumming his Martin or eating brown rice at the White Panther House on Hill Street.

Someone told me once that Neil actually wrote a song -- can't remember which one -- on the piano at Guild House, the campus ministry near Dominick's. Can anyone confirm or debunk this?

Anyhoo, Neil's latest release, "Sugar Mountain: Live at Canterbury House," only strengthens the man's ties to Treetown, since it was recorded at that other campus ministry, which still exists (although in a new location).

John the Revelator hasn't heard it yet, but he has some other solo-acoustic bootlegs from this era of Young's career that are stunningly good. So odds are this one's no exception.

Anyone heard it yet? Meanwhile, here's some footage from just about the same era:

Posted by John the Revelator at 2:47 PM 5 comments:

If you're looking for Johnny in New Jersey, you can find him, naturally at the Jersey City Desk! There's nothing there yet but there will be. Apparently there is a city council guy out there who was at some cover band show in Washington DC, had too much to drink and took a wee on the people down below. Yeah, we'll be all over that. Going to see a cover band---heinous.

Go Eastern, beat Central on Friday. As long as I live I'll never forgive those CMU assholes for abstaining in their vote to kick us out of the MAC in the early 80's. They knew by abstaining the rest of the league had the votes to bounce us. Western voted to keep us. Every time EMU upsets the Chumpewas, a Huron gets his wings and we stick a finger in their goddamned eyehole.

Interns Zoltron and Kiki have decided to come on out to New Jersey with Johnny. The lure of the internet greasepaint was just too enticing.

Oh, and Donald Trump wants to buy the River Street property and build a casino on it.

May the road rise up to meet you Ypsilanti, at your permanent home on the corner of Elegant Street and Suave Boulevard in Cool City.

Take it away John the Revelator, they're all yours.

Borders says they are no longer for sale....

We are of two minds about this, first, great news. It mean Ann Arbor's independent bookstore is gonna make a go of today's ailing economy AS an independent, no doubt many employees are thrilled today. The other mind is that quite simply nobody would buy them when they were listing themselves for sale every week for the last few months. If they simply don't have the equity or products in warehouse and in store somebody would want to buy, how good of a go are they gonna make?. There is, of course the underlying problem that George Jones still runs the show and Mr. Jones hasn't exactly lit the fire under Borders to propel them to success or cut a viable deal.

We hope everyone there keeps their jobs and rides this out. Johnny has a lot of good friends at 100 Phoenix. I know there are some bright book business minds in there who truly love the field they are in. Trouble is they keep getting thwarted by the George Jones' in the company. Borders stock was trading under a dollar earlier this week for a short while, it wasn't the merch group or the buyers who did that, it was the higher ups.

Time for a change at the top at Borders we think...
Posted by Johnny Action Space Punk at 8:17 AM 4 comments:


Time for Ypsilanti, After Dark
Posted by Johnny Action Space Punk at 11:35 PM No comments:

A woman, asking not to be named reported a GIANT SPACE CAT HEAD last night setting upon her Toyota Camry (go cat go) as she travelled just north of Ypsilanti. She said the cat hit her Camry (again, go cat go) several times with it's laser eyes making a hash out of her hood and front headlamps. The evil space Kitteh then followed her as far as the Huron View apartment complex at Green Rd before turning and heading down the river. Ypsilanti police had no comment to YCD this morning.

People, here it is yet again and it's becoming more dangerous. We MUST (well YOU must, Johnny's leaving) draw this cat into the Cross Street area near the Tower where it's secret deathray can be used on this cat head. The fate of our fair city rests in the balance. How many must die before we as a community act?

Posted by Johnny Action Space Punk at 9:23 AM 2 comments:

Labels: avoid death, death cats from outer space, laser cat eyes, No kitteh thats a bad kitteh, you all had to know this was coming before johnny left

Time for Ypsilanti, After Dark 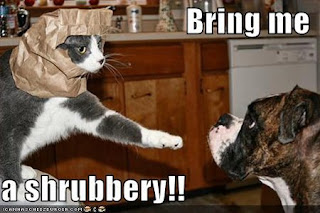 "Earlier this morning, after consulting President Susan Martin, I informed coach Jeff Genyk of my decision to move our football program in another direction, at the conclusion of the season"

YCD can't say as we're surprised, this year was supposed to be different, a much better team was expected. The EMU football program never really progressed under Genyk, it kinda stayed mired in that same crappy place it was in when he got here. One thing we WILL say in Mr. Genyk's favor, he cleaned out the nere-do-wells from the EMU football program. Football players at EMU now attend classes and aren't the drunken brawlers of yore. For that he deserves credit, making citizenship while at EMU important.

The Free Press also reports former Michigan coach Lloyd Carr will advise EMU in their search for a new head football coach. This should be OK as long as Eastern never schedules Ohio State.

Genyk had a 15-42 record at Eastern in five years with the Central tilt yet to come....
Posted by Johnny Action Space Punk at 1:21 PM 4 comments:

Ha ha ha, you all are gonna be stuck with a traffic roundabout at US-23 and Geddes

Johnny's gonna be gone but if I were you I'd raise some hell over the traffic roundabout the Michigan Department of Transportation is proposing for the bottleneck there. Johnny took the bus for four years, the number 3 route so he went through that stretch past Concordia College all the time. A roundabout isn't going to help that. You could solve the ENTIRE mess there by not letting people turn left off Geddes onto south US-23, make them to to Washtenaw or Plymouth Rd to grab it and problem solved.

A roundabout seems to be the super happy fix of MDOT anymore. Johnny has run solutions through his head there five days a week for four years. His is better.

More on this stupid idea here
Posted by Johnny Action Space Punk at 8:57 AM No comments:

What time is it in Bukavu, Belgian Congo?

It's always sunny in Ypsi, or is it?

Meet the Chief Clowns in Charge

Email Johnny at your own risk